Level in Salt and Sacrifice (SnS) is an overall representation of your character's progress, collective attributes and abilities. Levelling up is done by spending increasing amounts of Salt, the game's main currency, obtained by defeating Enemies. With each new level, players are provided with a Black Starstone, which can be used to directly enhance their Main Stats, or to unlock new Skills in the Tree of Skills screen. Main Stats and Skills indirectly influence a second group of attributes called Secondary Stats. These are divided between Combat Stats and Defensive Stats, and include properties like Poise and Fire Defense.

Level in Salt and Sacrifice

How do you Level Up in Salt and Sacrifice?

Levelling up is done through the Level Up menu. This option, however, is not accessible at game start as is only unlocked after reaching Pardoner's Vale, briefly into the game. West of the village, past the cliffs, you will find the Trifaul Idol, a large statue depicting a maiden with antlers and wings. Interacting with this idol will grant access to the Level Up menu. Here, you can spend the game's main currency, Salt, to increase your character's Level. After each level is reached, you will be granted a Black Starstone and, every few levels, you will get a Gray Starstone. Black and Gray Starstones are used within the Tree of Skill to unlock new abilities (Skills). 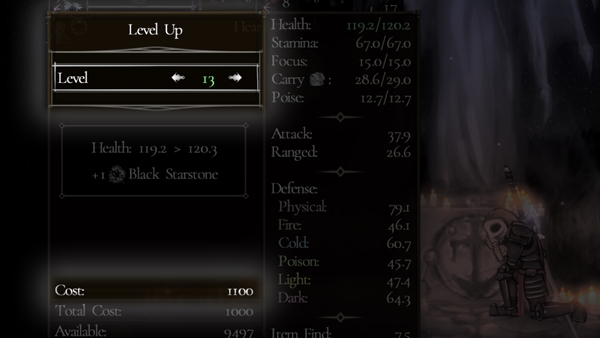 Level Cost in Salt and Sacrifice

Levelling up in Salt and Sacrifice is done by spending Salt, which acts as the game's main currency. Each time you level up, the amount needed to access the next level rises. The table below portrays the cost for levelling up at each stage.