Quests for Salt and Sacrifice features a list of various tasks or missions that a player can acquire and complete  throughout the game, quests are usually unlocked through the main campaign, during a series of events, or are given by certain NPC. Quests are divided into four single-player categories: Mage Hunts, Nameless Mage Hunts, Daily Hunts and NPC Missions. A fifth type of Quests are the Multiplayer Missions, in which players engage in different roles online. Completing quests grants various rewards such as Weapons, Armor, and more, but most importantly, it yields EXP that is allocated into leveling up the player's character. This page covers a list of all the Quests in Salt and Sacrifice.

Mage Hunts, or Main Quests, are the primary missions in Salt and Sacrifice. Mage Hunts are Special-Boss encounters that tie into your progression, this is because the Mage Hearts obtained when defeating these creatures unlock sealed doors necessary to advance in the game. Many areas and features are gated in this way, with the only path forward being to hunt these Mages down. Note that in the context of unlocking doors, devouring Mage Hearts is exclusive to each major area. This means that devouring a heart in, for example, Ashbourne Village, does not allow you to unlock seals in Bol Gerahn and vice versa.

Mage Hunts are activated within the different Locations. After travelling to one of the six main areas, you need to find and interact with special corpses scattered around the map to start the Quest. Even though these can be engaged in a non-linear manner without a particular order, access to some of these corpses will be sealed and therefore need to be unlocked by first defeating the Mages of those areas within reach. 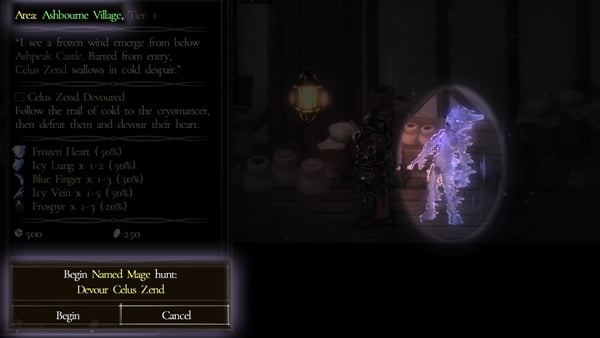 Mage Hunts are split up into two stages: The Chase and the Boss Fight. Upon activating a hunt, elemental trails will begin emanating in the area, pointing you in the direction of the Mage. These trails will take on the same element that the Mage primarily uses. Your primary objective during this stage is to find the Mage, deal some damage to it while fending off the various mobs it summons. The Mage will teleport to different areas several times before finally settling down in a final destination and beginning the boss encounter. This is denoted by the screen zooming in on the Mage and revealing their name and boss health bar.

There are a few things to note while chasing a Mage: Mages will summon several mobs to assist them. Which mobs are summoned will vary from Mage to Mage but these typically consist of a "Burnt" variant of the area's most basic Enemy and 3 unique types dependent on which Mage you are fighting.
Summoned mobs have a chance to drop Materials from the Mage's loot table, as well as Ashpyr and it seems they drop these items quite frequently so it is well worth defeating them.
Summoned mobs and the Mages themselves can and will attack the regular enemies found in the area, and vice versa. You can use this to your advantage but of course, be aware that both groups of enemies can damage you in all the commotion.
Dying during the Chase sequence does not reset the Mage to its original starting location. Instead, once you revive, you can find the Mage at the last spot it teleported to so you can continue the hunt from there. This is also true for when you die during the Boss Fight sequence. You will not need to give chase again once you revive.
Any damage dealt to a Mage during a chase sequence will be retained for the boss fight and it will have less health when the fight begins.

Nameless Mage Hunts task players with tracking and defeating Nameless Mages. These are essentially the same Magi Bosses as Main Hunts, but in a noticeable higher-tier-variant. This means that, although they have the same moveset and summon abilities, they are more difficult therefore posing a bigger threat. Completing a Nameless Mage Hunt will reward players with a special, unique helmet.

Nameless Mage Hunts are activated just like regular Mage Hunts, that is, finding and interacting with special corpses scattered around the different Locations. The menu promted upon interaction will indicate in Light Blue that the quest involves a Nameless Mage.
Defeating these high difficulty Mages in Nameless Mage Hunts is rewarded with unique Headwear. For instance, in this case The Nameless Mage is The Nameless Kinetomancer, a Kinetomancer type Boss, and its unique reward is the Force Slab Heavy Armor Helm. Note that this reward doesn't have any probability associated as these are guaranteed to drop. 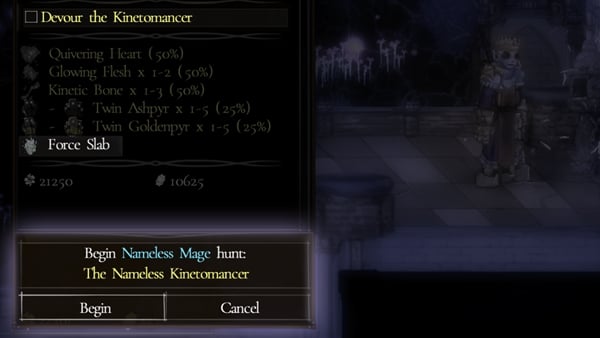 Fated Hunts, or Daily Quests, are stage-specific Quests that need to be unlocked for each Location.

In order to activate Daily Missions for a specific Location, you need to find the corresponding Tome of Fates within that stage. Note that each tome corresponds to a certain location and can only be found there, as they contain missions for that specific region. Once the Tome of Fates is acquired, they must first be handed over to Runereader Diedela at Pardoner's Vale. She will interpret the contents of that particular tome and Daily Missions for that location will become available in the Mirrorgate under the Daily Quests tab.

These missions act as daily quests that you can complete to farm Salt, Silver, Crafting Materials and Upgrade Materials. Completing these daily quests is highly advisable, as they not only allow to improve your character, but will often yield the opportunity to notice areas you previously missed - given you were probably hunting each of the location's main Bosses.

NPC Missions are Quest Lines assigned to you by the various character you come across during gameplay. They each have a set of rewards and span over the different Locations of Salt and Sacrifice.

Multiplayer Missions constitute the online experience of Salt and Sacrifice. These consist in taking the role of one of the different in-game factions during online sessions. The role you assume - and therefore the type of Mission - depend on which NPC character you interact with to initiate the multiplayer mode. Fore more info on these type of missions see Multiplayer.